BUCS Cricket got you stumped? There's a lot to know about the BUCS' indoor and outdoor cricket programmes.

BUCS runs both indoor and outdoor cricket over the academic year.

Friday 3 September: Deadline for free withdrawal by contacting ([email protected]). Entry fees will not be charged for teams withdrawing before this date. Any withdrawals post this date will be subject to our Cancellation & Withdrawal Policy.

Leagues and fixtures have been published on BUCS Play but due to issues the venues for each of the leagues are below.

Find all the latest on Return to Play here.

Team entries opened on Wednesday 12 January, with the timelines for these below:

For any questions about the Cricket Programme, please email James Francis or Michaela Anthony. 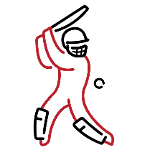