Hit the water with your team mates and swim your way to victory with the BUCS water polo programme.

All teams compete in their cup competition and fight for a spot in their respective finals, with Championship and Trophy finals held at BUCS Big Wednesday in March. 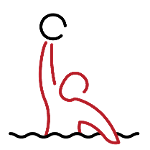